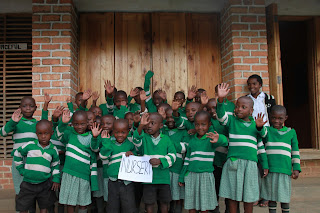 Mom and I have been slacking on the blog posts on our Africa trip. Funny how life has a way of creeping back in again.
I did want to post a video on the Kutamba school assembly that the school so graciously gave me while I was taking their pictures. It is one that I love and wanted to share with you.
I traveled with Christine - the Education Director for Nyaka, for 90 minutes up and down very rough roads to get to Kutamba which stands for "healing". Kutamba rests along side a very steep hill.
When we approaced the foot of the hill that leads to the school I imagined being a child and climbing that thing when it's rainy and I've already walked 6 miles.
I laughed when they showed me their soccer field because the ball would just roll down the hill!
I took pictures of all 200+ kids and they were happy to see me. I handed out a small sweetie for each one once they were done. 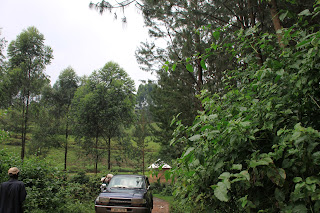 (Looking back at the school, you can barely see it through the trees but it's up there) 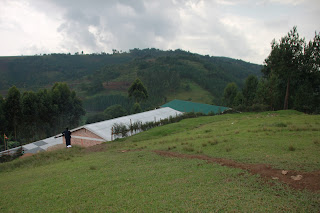 (View from thier soccer field - the school is below it)


This video is a bit choppy because I wasn't ready for video and didn't know how to work my sisters camera.
I just loved hearing their songs, I've watched this video many times and still enjoy it. 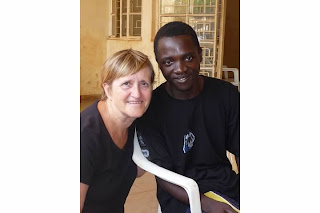 During our stay at FDLM the staff set up time to meet with the older students one on one, to hear their story and to offer prayer and encouragement.

Here's Godfrey's story:
Godfrey is a 24-26 year old man (he doesn't know his exact age).   Godfey's mother died while giving birth to him. His father was a lead witch craft in their village and died before Godfrey was born.
Godfrey went to live with his Aunt and Uncle outside of Jinja. He was tormented by spirits his whole life. At the age of 8 his aunt and Uncle took him to their Protestant church to get rid of the demons. He said after that the possessions got worse so he knew Jesus was working. He was indifferent to spirituality until about the age of 14. He came to live with his cousin who lives just down from FDLM because his aunt and uncle kicked him out. Even though they were Protestant they expected Godfrey to take over his father's business by becoming a witch and he didn't want to do that. It is a cultural norm that when you become a man you will take over the family business and his family's business was witch craft.
One night FDLM was having a crusade and Godfrey stopped by. The preacher was talking about how the Israelites were being bitten by snakes and how they were told to look upon Moses' staff and they would be healed. The preacher related that to looking upon Jesus that he would be healed. That night Godfrey came to know Christ.
He kept going to FDLM but after awhile his cousin got tired of having Godfrey at his house. His cousin gave him a choice - in one month he better have a job or denounce Christ. Godfrey looked for a job but couldn't find one and he refused to denouce Jesus. He went to Pastor David and David told Godfrey that he could stay with them.
He went back to school and finished secondary school. He was in the university but had to leave because of lack of funds for the university students. He has a passion for dramatic acting and film making. He takes a lead role in the church youth dance group.
He is alive in Christ and full of the spirit.
We asked him if there was something that we could pray for him and he said that he'd like us to pray for his family that they may come to know the Lord.
Godfrey works with the youth on at FDLM and is heavily involved with the dramatic and dance componenets of church. He also does a fine job leading prayer and getting up in front of a group.

Godfrey is another example of a Godly man that is vital to the healthy growth of the country. Uganda needs as many courageous men as they can get that love God, love their wife, love their kids and serve their community.  What an honor we had to meet him!
Posted by Lynette Sherer at 7:09 AM No comments:

You can make a difference...

You can donate to FDLM or Nyaka through the Peoria United Methodist Church.

You can also donate through Paypal:

How you can help:

You can make a difference. Check out the information on the bottom of this web page as to tangible and intangible support you can provide.